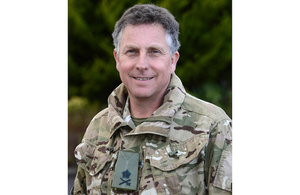 Her Majesty the Queen has approved the appointment of General Sir Nicholas Patrick Carter KCB CBE DSO ADC Gen to take over from Air Chief Marshal Sir Stuart Peach GBE KCB ADC DL as the next Chief of the Defence Staff this summer.

I am delighted to offer my congratulations to General Sir Nicholas Carter on his appointment as Chief of the Defence Staff, a post he will take up in June of this year when Air Marshal Sir Stuart Peach becomes Chairman of the Military Committee at NATO.

General Carter has been an exceptional Chief of the General Staff, leading the Army at a time of rapid change, with troops deployed to deter Russian aggression and protect our NATO allies in the east. He has also overseen the delivery of vital training to help Iraqi Security Forces defeat Daesh.

At this crucial time for defence, as we look to strengthen our Armed Forces in the face of intensifying global threats, I’m confident General Carter will be an outstanding Chief of the Defence Staff.

Air Chief Marshal Peach has served the UK with distinction throughout an exemplary career and his advice and professionalism have been invaluable to me and the other members of the National Security Council during his time as Chief of the Defence Staff. He has demonstrated incredible commitment to keeping the UK and its citizens safe and we owe him an enormous debt of gratitude for his service. It is entirely fitting that he is leaving to take up a new role with NATO, which has served as the bedrock of our defence for nearly six decades. He will be the first British Chairman of the NATO Military Committee for more than 20 years.

General Carter is a superb choice as the next Chief of the Defence Staff and will bring vast experience to the role having served as Chief of the General Staff for nearly four years. In that time I have been impressed not only by the reforms he has carried out with the British Army, but by the care he has demonstrated for the men and women under his command. It is also a testament to him that over his period of leadership the Army has become more reflective of the society it serves. I am confident General Carter will bring the same dynamism to his new role and I look forward to working with him.

A biography of Sir Nick can be found here.